Rietfontein Ostrich Palace
Welcome to SafariNow. Get off your accommodation booking by paying with the voucher code before . 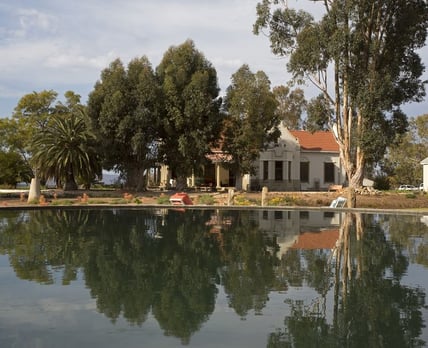 Welcome to Rietfontein Ostrich Palace which is a working ostrich farm situated between Calitzdorp and Oudtshoorn on the Route 62 – the longest wine route in South Africa. It is the oldest working ostrich farm in the Cape Colony and was established by the Potgieter family in 1897. It boasts one of the most intriguing ostrich palaces dating back to the early 1900s.

Enjoy a scrumptious meal at our restaurant - we serve ostrich cuisine and local wine. Our accommodation comprises three units with six rooms, each with an en-suite bathroom and equipped with all necessities. Experience a one-hour private ostrich farm tour daily, or the historical side of Rietfontein Ostrich Palace and the Feather Boom Era.

3 guest reviews Reviews of
★★★★★
5 out of 5 stars
5 star 3
4 star 0
3 star 0
2 star 0
1 star 0
Ed Richardson
★★★★★
13 July 2017
Rietfontein is a jewel of the Karoo. The dinners and breakfasts are prepared with care and imagination. Their ostrich fillet is a must - even if you are staying somewhere else and treat yourself to a dinner in the restaurant.
Debbie
★★★★★
18 March 2017
Elegantly decorated with antiques, the beautiful rooms are just a small part of the pleasant surprises we encountered at the Rietfontein Ostrich Palace. Elmarie and Kobus are wonderful hosts who made us feel like we were friends! Each dinner course was a feast for the eye and the palate, and breakfast was superb. Dont drive by if youre travelling on the R62 through the Karoo. The Rietfontein Ostrich Palace is worth a closer look!
Claude-Alain Humbert, Switzerland
★★★★★
08 May 2012
Rietfontein Ostrich Palace is just wonderful, Elmare and Kobus are friendly hosts, the meal in the restaurant great!We had Emmas Cottage, where Senta Berger lived while working on the movie. Beautiful and nice cottage.In the morning Kobus took us into the field with ostriches. Wow! They are big. Rietfontein Ostrich Palace is an experience!

Click to display the map
Rietfontein Ostrich Palace is 20.3km from the centre of Oudtshoorn , the nearest airport 60.9km (George Airport).
*Distances are shown as the crow flies and not necessarily the actual travelling
×