AHA Thakadu River Camp
Welcome to SafariNow. Get off your accommodation booking by paying with the voucher code before . 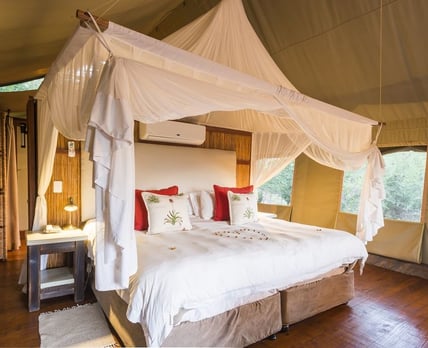 Thakadu River Camp is an Eco-tourism partnership between North-West Parks, the Molatedi Community and the operator, The Nature Workshop. The community has a 45-year lease to operate a commercial lodge with traversing rights across the Madikwe Game Reserve. The concept is unique in South Africa in that the community owns the development, with substantial benefits accruing back to the community itself.

Thakadu River Camp is set within the riverine canopy along the banks of the Marico River and consists of 12 tented suites, each with their own viewing deck overlooking the river. The tents are spacious and are superbly decorated and appointed. The core of this project's success lies in its prime location: the Madikwe Game Reserve. This area is located along the Botswana border and 20km from Gaberone, one of the few reserves in southern Africa which is malaria free.

Thakadu River Camp is set within the riverine canopy along the banks of the Marico River in the eastern sector of the Madikwe Game Reserve. The camp comprises of 12 tented suites, each with their own viewing deck overlooking the Marico River. The tents are large and spacious and have a strong Afro-Asian Safari ambiance to them.

Weather : Hot, wet summers and cool to dry winters. Rainfall : September to March. Temperature – Daytime temperatures in summer (October – March) are high and comfortable. Winter (May to August) is known to produce beautiful warm days, though the evenings and early mornings can be quite chilly. Please note: rates include two game drives per day

4 guest reviews Reviews of
★★★★★
4 out of 5 stars
5 star 3
4 star 0
3 star 0
2 star 1
1 star 0
Marie-Louise van der Merwe, South Africa
★★★★★
13 July 2015
We stayed at Thakadu River Camp for 3 nights, and it was a very nice, relaxing experience. The food was lovely and the staff very helpful and friendly. Our game ranger also had a vast knowledge of the bush and went out of his way to show us Madikwe.
Bob Holloway, South Africa
★★★★★
22 April 2014
Madikwe game reserve was spectacular as ever.Thakadu River Camp was good in many ways, Tented accommodation and Game drives. I thought the food offering was relatively poor. Generally 3 course dinners with no choices. Food was also lacking in imagination, very uninspiring!! Seemed to be "on the cheap", which I have not experienced before in Madikwe Lodges.We will not return.
Johanna McDowell, South Africa
★★★★★
28 September 2009
We were there for four days. Excellent food, hospitality and caring environment. Marvellous team of staff - lovely singing. Great atmosphere. Quite unique.
Jennifer Wandl, Australia
★★★★★
05 November 2007
My husband and I had a wonderful time at Thakadu. The staff were very caring and made sure that we were well looked after at all times. Andre took us on really long game drives and did his best to find what we were looking for - not always possible. The room staff not only cleaned, but tried to keep us tidy as well!And the food - top class gourmet. Your chefs could work in Paris.The fittings and feeling of the place were absolutely in keeping with the game park.

Click to display the map
AHA Thakadu River Camp is 49.4km from the centre of Madikwe Game Reserve , the nearest airport 66.5km (Sir Seretse Khama International Airport).
*Distances are shown as the crow flies and not necessarily the actual travelling
×