Welcome to SafariNow. Get off your accommodation booking by paying with the voucher code before .
South Africa/Western Cape/Cape Town/Cape Town City Centre/District Six Museum 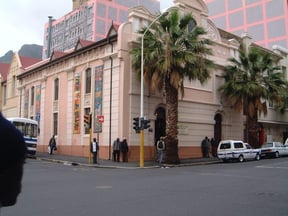 District Six was the name of the Sixth Municipal District of Cape Town, established in 1867. The museum acts as a reminder of the terrible forceful removal of the residents during South Africa's apartheid era.

District Six was marked as a white-only area in 1966 following the Group Areas Act in 1950. As a result, 60 000 people were forcibly moved out of their homes and resettled in the barren area known today as the Cape Flats. Homes were levelled with bulldozers, leaving little reminder that District Six ever existed.

Following South Africa's transition to democracy in 1994, the District Six Museum was founded to represent as a memorial to the people and their heritage, and to confront South Africa's dark past.

Sleeps 4 in 2 rooms
Cape Town City Centre Self-catering, Hotel
This classically elegant self cater studio apartment is located in the heart of the old city opposite the famous Company Gardens. It's a...
View Deal

Sleeps 4 in 2 rooms
Cape Town City Centre Self-catering
From the 10th floor of the Icon Building in the centre of Cape Town, you get a bird’s eye view over the city to Table Bay harbour from the...
R1450
Avg per night
View Deal

Click to display the map
District Six Museum is 0.6km from the centre of Cape Town City Centre , the nearest airport 20.1km (Cape Town International Airport).
*Distances are shown as the crow flies and not necessarily the actual travelling

Other things to do near Cape Town City Centre

Bar or Nightclub in Western Cape
Proud of it's Argentinian influences, Chakkachurri Bar offers an exceptional venue for a night...

Popular Attraction in Western Cape
Come and enjoy the thrilling experience of real-time combat with G-Force Paintball, perfect for...

Wine Estate in Somerset West
Ridgemor wines dates back to 1670 and is considered one of the oldest wine farms in the area....
See all things to do near Cape Town City Centre
WEB4