Welcome to SafariNow. Get off your accommodation booking by paying with the voucher code before .
South Africa/Western Cape/Oudtshoorn/Cango Wildlife Ranch 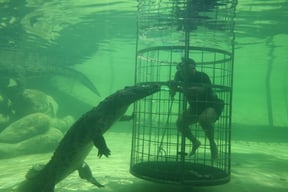 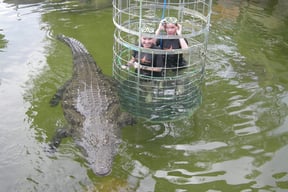 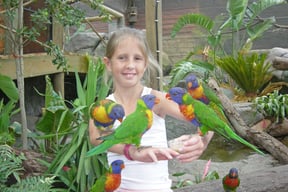 Experience the thrill of being almost tooth-to-tooth with a Nile crocodile or wrap yourself with a python at the Cango Wildlife Ranch and Valley of Ancients in the heart of the Little Karoo!

Far more than just a petting zoo, this endangered species breeding facility is the oldest and largest cheetah contact centre on the planet. Visitors have the opportunity of interacting with hand-reared cheetahs as well as getting actively involved in conserving endangered species.

Take a stroll on the ‘catwalk’ and view lion, cheetah, puma, white Bengal tigers, meerkats, pygmy hippos and many bird species. You can also visit rare and rather large reptiles at the snake park and crocodile pools.

Run the race against extinction whilst having the time of your life and get involved with the Cheetah Preservation Foundation. Founded in 1988, the principal aim is to ensure the survival of the cheetah and other endangered species, as well as educating visitors as to the plight of the these animals.

8 reviews Reviews of
★★★★★
4.2 out of 5 stars
5 star 4
4 star 2
3 star 2
2 star 0
1 star 0
Suretha Hoffmann
★★★★★
05 January 2016
Baie leersaam gewees.
Philip Spicer
★★★★★
12 January 2015
Went to Cango Ranch as the Caves were fully booked and was reluctant to go but our 13 year old had seen the signs. It was a lovely surprise with really helpful and informative staff, well looked after animals and a nice atmosphere. Well done as this is hard to achieve in parks like this.
adam felix
★★★★★
04 January 2015
Good.
Juan Bredenkamp
★★★★★
01 April 2014
Great family outing
Craig Knox
★★★★★
05 January 2014
Well laid out, informative and exciting.
Sofia Silva
★★★★★
03 January 2014
What an awesome day we had. Hubby dived with crocodiles and myself and the kids had an encounter with two white tigers. We also did the tour of the ranch with a very knowledgable tour guide. Would highly recommend it!!
Adele Mosley
★★★★★
21 December 2013
Exciting!
Jacky Bellengere
★★★★★
17 December 2013
My family and I thoroughly enjoyed our visit to the Cango Wildlife Ranch. Don't be put off by the fairly steep admission fee as it is extremely good value for money. All the animals look very content and well cared for and the staff are very attentive to both their animals and their visitors. The layout of the enclosures is very professional and I enjoyed walking along the raised wooden walk ways which ensure you get a good view of the animals. I loved seeing the large fruit bats, the lemurs and the large cats in particular. Highly recommended.
Show More Reviews

★★★★★ 2 Reviews
Sleeps 25 in 10 rooms
Oudtshoorn Bed and Breakfast, Guest House
This 5 Star establishment is situated on the outskirts of Oudtshoorn, on the main road to the Cango Caves. The Victorian Homestead, circa...
R5100
Avg per night for 2 guests
View Deal

★★★★★ 34 Reviews
Sleeps 22 in 9 rooms
Oudtshoorn Guest House
Come and enjoy an unforgettable holiday in one of the finest places in the Klein Karoo en route to the Cango Caves. The Boulders Lodge is...
View Deal

★★★★★ 6 Reviews
Sleeps 24 in 12 rooms
Oudtshoorn Lodge
Nestled within a rugged mountainous terrain is a place of happiness. The lodge's quiet farm atmosphere offers sanctuary from the glow and...
View Deal

★★★★★ 5 Reviews
Sleeps 16 in 4 rooms
Oudtshoorn Self-catering, Bed and Breakfast
Conveniently located in a quiet area of Oudtshoorn, Haus Victoria is set on a 2600 square metre property. We have plenty of information to...
R750
Avg per night for 2 guests
View Deal
See all accommodation near Oudtshoorn

Click to display the map
Cango Wildlife Ranch is 2.9km from the centre of Oudtshoorn , the nearest airport 51.8km (George Airport).
*Distances are shown as the crow flies and not necessarily the actual travelling

Other things to do near Oudtshoorn

★★★★★ 1 Review
Waterfall in De Rust
The Great Waterfall on the Meiringspoort Pass is a beautiful place to have a picnic and a...

★★★★★ 2 Reviews
Theatre, Gallery or Museum in Prince Albert
Situated in Seven Arches, a gracious Victorian building opposite the Fransie Pienaar Museum, the...

★★★★★ 2 Reviews
Farm in Prince Albert
Get the real Karoo farm experience! Magnificent views, bird-watching, horse riding, baboons and...
See all things to do near Oudtshoorn
WEB6