Motebong Lodge
Welcome to SafariNow. Get off your accommodation booking by paying with the voucher code before . 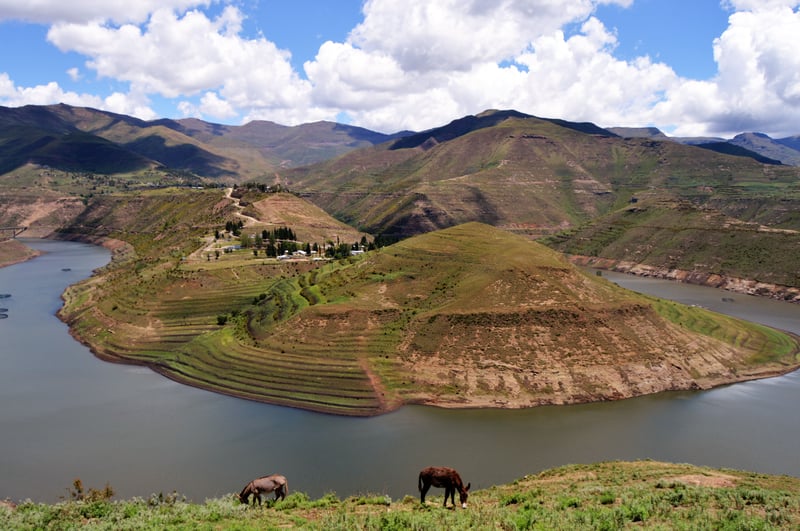 HISTORY OF THE LODGE
Motebong Lodge is located on the shores of the Katse Dam, with direct access to the dam for fishing and boating. The lodge has fully equipped self catering units. There is also a Restaurant and bar on the premises.While staying with us guests can go hiking, horse riding and go on a guided tour of the Katse Dam.A sun-downer boat cruise can be enjoyed by the family and friends. (CAMP)The Ha Lejone camp was constructed in 1990, ahead of the start of the transfer tunnel construction in 1991. The camp was necessary because, with a population of fewer than10,000 people, Ha Lejone simply had no capacity to house the hundreds of staff from the construction companies and their families. With the comfort of staff in mind, the camp accommodation is designed for maximum energy efficiency, given the harsh winter conditions. The houses are mostly north facing and are insulated to maximize passive heating. In addition, all family units are equipped with anthracite heaters to protect them against the harsh winters of the Lesotho Highlands.The camp was self-sufficient with a tuck-shop for essential supplies, a clinic with access to doctors and supported by a trauma unit in Hlotse, a pre-school and a primary school on-site. Self-sufficiency in the camp was necessary as there was only one general dealer and a few smaller stores (all with a limited range of products) for Ha Lejone and surrounding villages. Even after Mafika Lisiu pass was completed, Ha Lejone remained largely un-serviced and the terrain made regular trips to the lowlands un-attractive.Because of the lack of proper roads in the highlands prior to the LHWP, travel was mainly by horse or by aircraft – serviced by Basutair from 1961 that was owned Richard Southworth and was subsequently bought by the Government for M100,000 in 1969 and named Lesotho Airways. Tales told by pilots of the flying the mountain shuttles are legendary and often hilarious! Hand luggage often consisted of items such as live chickens, pumpkins etc. and these did not rank as either funny or unusual! In those days, it was the norm for people living in these remote areas to have been on an aircraft before they had been in a motor vehicle.Travel into the highlands changed dramatically with the completion of the tarred road in 1990, and so did human practices. The new road featuring the Mafika Lisiu pass at 3090m allowed the transport of aggregates, concrete and other much needed construction materials and equipment for the dam project. It was only with the completion of this road that the residents of Ha Lejone and other villages saw sedans and mini-bus vehicles in their areas. An unintended consequences of the new roads was the demise of the established general dealer businesses run by traders with access to extreme 4×4 trucks to transport their supplies – older folk still have fond memories of the old Mercedes 1517 4×4 truck and the Haflinger 4×4 coming over the formidable Ha Koasa pass, taking half-a-day to cover 40km. People now travelled to experience the novelty of town shopping in the low lands. Equally, with greatly reduced passenger loads, Lesotho Airways gradually reduced the highlands route until these routes were abandoned. By October 1996 the airline suspended all operations, leading to the company winding down in 1997.The first residents of the camp arrived early in 1991, ahead of the start of the tunnel construction on 1st February 1991 (same time as the start of construction of Katse dam). The staff of Mott MacDonald consultants of the United Kingdom were housed in a section currently occupied by Katse Fish Farm, with the staff of The Lesotho Highlands Project Contractors (LHPC) occupying the rest of the camp.LHPC was responsible for the 45 km water transfer south tunnel to Muella (which roughly goes below the camp) & 15 km delivery tunnel south. LHPC comprised of Spie Batignolle (France), Balfour Beatty (UK) LTA (South Africa) Campenon Bernard (France and Ed Zublin(Germany) and Electrical and Mechanical subcontracted to the LHPC were: Neyrpic of France and SDEM of South Africa; Deutsche Babcock of RSA for steel liners for the under river-crossing; Krohne Altometer of the Netherlands for the Flow metres.Upon completion of the tunnel in 1997, the camp lay unused until it 2007, when it was occupied by staff of Lesotho Diamond corporation (LDC) which was mining the Kao Diamond Mine. Lesotho Diamond Corporation ceased to exist during 2008. The collapse of the LDC operation allowed for the start of negotiations in December 2008 between Motebong Tourism Investment Holdings (MTIH) and Government of Lesotho (GOL), for MTIH to takeover and operate the camp as a tourist facility.Agreement was reached between GOL and MTIH in late December 2009, allowing for the long and difficult task of the rehabilitation and conversion of the near derelict camp to a comfortable guest facility by MTIH. The idea is to add the comforts without losing the basic construction camp character and the historical feel.

Beach: Motebong Lodge is located along the banks of the Katse dam so it is well suited for boating and fishing. The chalets are located within 50m from the Katse Dam

Conference Venues: The Village offers a hall accommodating up to 100 delegates, with several breakaway rooms.

Family friendly: The lodge has a beautiful Jungle Gym. Children and their parents can also go horse riding within the lodge or out into the village. There are hiking trails that can be explored by our guests with the assistnace of a tour guide or on their own.

Both currencies are accepted at the Lodge. All self catering Chalets have the necessary kitchen utensils for guests. There is a bar with a good wine and whisky selection and a restaurant where we our menu includes meals such as fresh trout and mountain lamb which are highly recommended.

60 guest reviews Reviews of
★★★★★
4 out of 5 stars
5 star 19
4 star 23
3 star 10
2 star 4
1 star 4
Ria Swanepoel
★★★★★
19 July 2021
We absolutely loved the setting and surroundings. The restaurant was excellent, dinner very tasty. If you stay here, do take the walk to the waterfall - it is a must-see. Breathtaking. We made the mistake of driving there in order to save time, but it would have been quicker to walk, as the road is really bad. The only unfortunate incident, was that the vehicle taking our Venter trailer up the road, indented it on both sides while reversing. Very unneccessary damage to our vehicle.
Tim de Bruyn
★★★★★
16 June 2021
What a well run, organised place. Staff were very accommodating, friendly and very willing to go the extra mile (from the grounds keeper to security to reception - all awesome). Next trip there, I will stay longer - for sure.
Constant Hoogkamer
★★★★★
02 May 2020
Surprisingly I get to give a review. After numerous emails to the facility regarding our stay, without any answer, we get to give a review. With the lock down we could not go and send email after email but no response. With such bad response I would not consider going their again. I hope that the facility will refund us as nobody could travel
astrid Erich astrid Erich
★★★★★
04 April 2020
You could very much improve your communication.Because of Corona I had to cancel the whole trip to SA. I have been trying to contact you several times. But I never got any answer from you or the lodge. I am very much disappointed in SafariNow. I paid the full amount . A refund or voucher for future use, as most of the hotels have done, would be highly appreciated!
Hannes Enslin
★★★★★
25 February 2020
Locality is ideal for visiting Katse Dam
Show More Reviews

Click to display the map
Motebong Lodge is 46.7km from the centre of Katse Dam , the nearest airport 112km (Moshoeshoe I International Airport).
*Distances are shown as the crow flies and not necessarily the actual travelling
×